Starting over in a new land

In Venezuela, Javier Campos was a petroleum engineer and Karla Losada was a lawyer.

When they decided to move to the Lowcountry two years ago with their two children, they knew they wouldn’t easily step into the same professional lives.

Despite the high number of Spanish-speaking residents in the area, the language barrier made it hard for the couple to find work. Friends directed them to The Literacy Center, where now they are working to become fluent in spoken and written English.

For 46 years, The Literacy Center has been helping Lowcountry residents learn English and improve their reading skills. Today, the center is also working to address another major problem in the Lowcountry: A shortage of trained workers in the workforce.

“We’re working to move from just basic ESL services that we do now to workplace services,” said Brad Steele, executive director of the organization.

Literacy and English language issues affect more than a person’s ability to communicate. According to the National Adult Literacy Survey, almost a quarter of adults in the United States read at lower than a fourth-grade reading level. In Beaufort County, about 11 percent of the adult population is functionally illiterate; Jasper County’s rate is closer to 27 percent. The area also has seen a growing need for ESL services as a large influx of Spanish-speaking people move into the Lowcountry.

“We think what we’re doing is life-changing,” Steele said. “If you don’t have the skills to engage with your family in the community, in your workplace, you’re lost.”

Out of the 500 students currently enrolled at The Literacy Center, 111 have college degrees from other countries, Steele said. Many have doctorates, law degrees and other advanced degrees. Yet many have had a hard time finding jobs with livable wages, Steele said.

“We are trying to get our students to the next level — not just in their language skills but in their migration to earning a livable wage,” Steele said.

The Literacy Center is partnering with organizations including SC Works to create trade pathways in industries like hospitality and service. Steele said the center intentionally sought local employers who were known for promoting from within their companies. Students also will be encouraged to continue their studies thanks to tuition assistance programs at Technical College of the Lowcountry and University of South Carolina Beaufort, Steele said.

That focus really resonates with The Literacy Center tutors like Steven Fee. After working in an international banking career with CitiBank and living in five countries, Fee started teaching in North Carolina.

“I felt like I knew how hard it had been to go into a country where you didn’t speak the language, and I worked for a big bank,” Fee said. “I had a support structure and everything, and I thought well, I can both sympathize and empathize with people who are doing this. I’ve been doing it since then. I think it’s about 12 years, seven or eight of them down here in the Hilton Head area.”

In the fall, the first class of workplace pathway students will begin their training with local employers as partners. Students are learning English in context to the job they are training for.

The students are excited to get into job training, but Fee said moving from professional trades to service-driven jobs can be challenging.

“You can see it’s hard,” Fee said. “You’ve had stature-level jobs, and now all of a sudden you’re at the bottom of the chain at a job that doesn’t have status.” 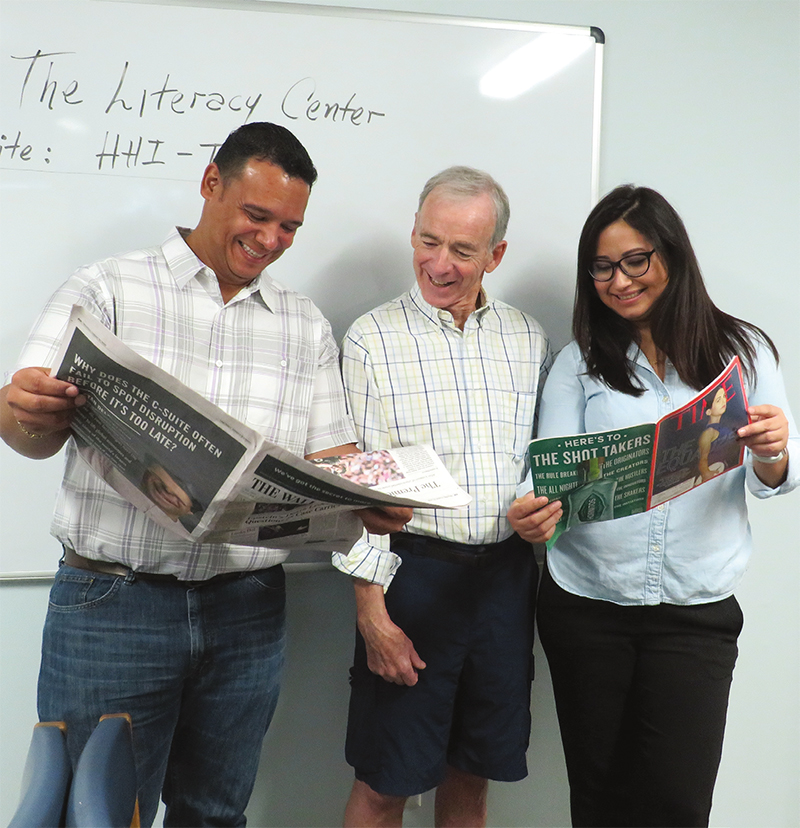 But learning the language helps restore some of that self-esteem, Fee said. When his students start to master English, “… they’re much more confident in using it, and therefore start to feel part of this place and not just like hired help brought in to just fill lower-level jobs.”

The Literacy Center always needs day and evening tutors at their learning centers in Bluffton and on Hilton Head Island. Typically tutors teach two days a week for two hours each class. No prior teaching or second language skills required. For more information call 843-815-6616 or go to www.theliteracycenter.org.

Brad Steele, executive director of The Literacy Center, got more than he asked for when he approached Dave Gaal, president of the Hilton Head Area Home Builders Association and Gaal Custom Homes, about remodeling the learning centers on Hilton Head Island and in Bluffton.

“We had little to no budget to make the capital improvements. The Learning Centers hadn’t been remodeled since 1995,” Steele said.

Gaal acted as project manager and secured $35,000 worth of products and services from HHAHBA members and other vendors to paint, replace carpet, install hardwood floors and LED lighting, and construct two new classrooms. Contractors who donated time and materials include: GAAL Custom Homes, The Greenery, Thefrenchguy Photography, Gartec Electric, Floors To Go, Hydro Shield South Carolina, Santana Painting, Sherwin Williams and the Cregger Company. The remodeling projects are finished and students, volunteers and staff at both centers are enjoying the improvements.